While reading Bhagavad Purana a question came in mind, Krishna and Ram were incarnation of Sri Vishnu then why Ram had to live in forest for 14 years?, why Ram had to stay away from Sita?, why Krishna lived away from parents?, why an injury was the cause of death of Krishna?

“All is bond by Karma, this bond leads to another bond if we become servant of the bond.”

As per ram katha, a sage’s wife gave shelter to devils during war of God and devils, angry with this, Vishnu took life of her. Sage got angry and cursed Vishnu that he will take birth as man on earth and will suffer the pain of separation. Same way Krishna’s death was result of curse.

All was pre-determined, all was the result of Karma. All is having bond of Karma.

There comes a question, how can Vishnu be bond by Karma?

Followed by the answer which have words of Krishna, “No one including me can stay away from the bond of karma“. Maya, Karma are creations of vishnu. Vishnu in the form of incarnation accepts them and acts but without affection.

This was a big lesson, which is guiding me all the time to perform my duties without affection, with the feeling that i am not the “Karta”.

“At the edge of darkness there is light, so train your eyes to see the edge”

During discussion with team members came this statement. One argument was the edge is the END. How can it be an end? End is the state where mind stops thinking, where we stop finding ways.

Ram was standing at the shore of ocean with Lakshman and others. All were just able to see the water. But Ram stated, “look dear, we are near to Sita, on the side of this ocean there is Sita…..”. Eyes were giving illusion that edge is where sky and water meets, END. But Ram could see the other side of that ocean, Ram could see Sita waiting for him, Ram could see the brightness.

Walking on the path of life, we find hard times, which is merely our thinking. While passing those days, we think there is no brightness. This situation will continue and we will be there forever. But I say, how is it possible? It can be possible only if we dont make any efforts to come out of it. It can be possible only if we wish to stay there forever.

It is we just train our eyes to see within limits. We forget our goals and find ourself trapped in the temporary situation. Only training eyes can help us see the brightness waiting for us outside the dark tunnel and help us see what Ram could see.

On this day I want to share the Maha Mritunjaya Mantra and its meaning as it is in Shiv Puran. 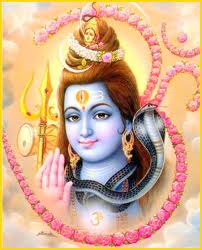 Daksha father of Sati insulted Shiva, which she was not able to tolerate and she left her body. Devastated with this incident Shiva sends two Rudra Gana to teach lesson to Daksha. These Rudra Gana gave appropriate punishment to the attendees, among these attendees one was a sage “Dadhicha”. He remembered his teacher “Shukracharya” when he was given death punishment. His teacher knows the power of Mritunjaya Mantra, he arranges the body and brings it to life with the power of Mritunjaya Mantra. Then he teaches his student this Mritunjaya Mantra with meaning which is as below…

“we bow to the supreme, who is being worshiped by Vishnu (who nourishes world)  and Bhrama (who creates world), whose name we take before all, who was present in the beginning of the universe and who will be present after it. Who have three eyes and trident, we bow you.”

“like the flower fills the garden and surrounding area with its fragrance, we fill our heart with your name”

“When we untie the ties of bond with this world, with the people and forget everything. When we leave this world behind and its relationship, when we leave dearones and belongings back”